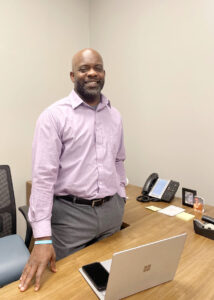 UPPER CUMBERLAND — The Upper Cumberland Development District (UCDD) has named Damon “Dee” Prince as the new HR/Benefits Manager for both UCDD and the Upper Cumberland Human Resource Agency (UCHRA). Though Prince has only just recently been promoted to this position, he is no stranger to UCDD/UCHRA or the human resources environment.

Prince brings more than 15 years of experience to the role; having served in various human resources-related roles in the past including director, manager, senior generalist, payroll coordinator, and benefits administrator.

“Dee brings a wealth of experience to our team and we are excited to be able to promote from within,” said Mark Farley, UCDD/UCHRA Executive Director.

Prince previously worked in the in-home healthcare and automotive manufacturing fields. The human resources components of these fields, he says, are fast-paced, detail-oriented, and demanding environments.

“My experience of working at a level of performance that requires productive results, leaving little room for error will help in my adjustment to this new role,” Prince added

Initially hired as the CASA Program Director in April 2020, Prince is very familiar with UCHRA and its available programs and services. From January 2014 to December 2014, he was a Work Activity Contractor with the Families First Program and had an office located within the same building as the UCHRA Central Office.

“My office was located next door to the CASA program office and I learned so much about them with each visit,” Prince said. “During that time I worked at the UCHRA building, I was able to absorb information about many of the other service programs and their leadership teams.

“Working as the CASA Director was an awesome experience,” he added. “My team of coordinators were so knowledgeable, compassionate, and professional. Each day, I checked in with my team, performed administrative duties and reports, hit the streets to raise funds for the program, and recruit advocates. This position was arguably the best job I’ve had and the best team of people to work with.”

As for his new role with now both UCDD and UCHRA, Prince is already settling in, meeting with every employee of UCDD and UCHRA, and says he hopes to bring value, efficiency, and productivity while promoting a safe work environment.

“This position allows me to lead the facilitation of company compliance and benefit resources,” said Prince. “It also gives me a platform to provide a high level of service to my fellow employees and our agency program clients.

“I look forward to getting to know my fellow co-workers better as professionals and as people,” he added. “I also look forward to adding value to the leadership team and helping mold the UCHRA/UCDD partnership as a strong union, offering high-level service to the communities we serve.”

A 2014 graduate of Tennessee Tech University’s Interdisciplinary Studies program, Prince is currently working toward a master’s degree in Professional Studies. He also serves on a variety of community boards and committees including IMPACT Cookeville, Multicultural Advisory Council, WCTE, CRMC Foundation, and the Joint Economic Community and Development Board.

When he’s not at work, completing school assignments, or engaged in a board or committee meeting, Prince can be found spending time with his eight children whose ages range from 24 years to just a few months – Adam, DeMaya, Dalen, Charlie, Arren, Taylor, Harper, and Dreyah – he shares with his partner, Jade.